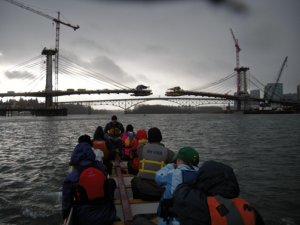 So there I was sitting in the middle of the Willamette River in the pissing rain and no one had forced me to be there. It was raining so hard that I swear the golf ball sized drops were literally bouncing off the river. Naturally, I was wearing my work clothes since at the time I didn't own any water-proof gear, and I had been in the library on a public desk 45 minutes earlier.

Last time I was in a boat Smash Mouth was still cool. How had I got myself into this situation?

Two weeks earlier I had been sitting at the Lucky Lab with Bill Barnes. We both had daughters in the same Multnomah Art Center play and were taking the opportunity to have a quick pint before the main event. We had seen each other before several times but did not really know each other that well, so the conversation got around to what we do in our spare time. I mentioned that I a ran a few times a week and did lots of library related work and he mentioned Dragon boating.

I believe his turn of phrase was something like 'good fun on the river and not too extreme a form of exercise'. Note that I have forgiven Bill for this misrepresentation and do not intend to initiate a law suit based upon the truth in advertizing statutes. He continued, more accurately I might add, that the castaways were a fun, not aggressively competitive team, welcoming to new comers, and free of a hierarchical or elitist attitude to newbies. 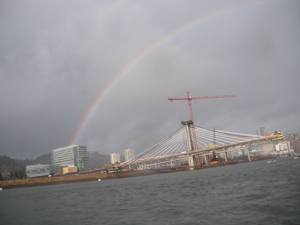 My experiences of the last three weeks have made me very glad that I gave this a try. Despite having crappy beginner form, and often slipping out of time when we change tempo, I have found all the positives that Bill listed to be correct.

It has been a great series of work outs and compliments other sorts of cardio very well. Getting out on the river is a fantastic cure for the Oregon gray sky blues, and the team members are just as friendly and willing to help a newbie learn as I had hoped.

I should also mention that I have found the City views stunning. Speaking of which, as I sat there soaked to the underpants, an incredible thing happened. The sun came out. A rainbow, the like of which I have seldom seen, broke forth on the river. It looked like the tail of that thing was actually hovering like a mirage atop the water. I heard someone say, 'Looks like we're the pot of gold at the end of the rainbow.' It struck me: the reward at the end of this rainbow is good friend ship and comradery, not to mention the bigger guns.